The worst street in London 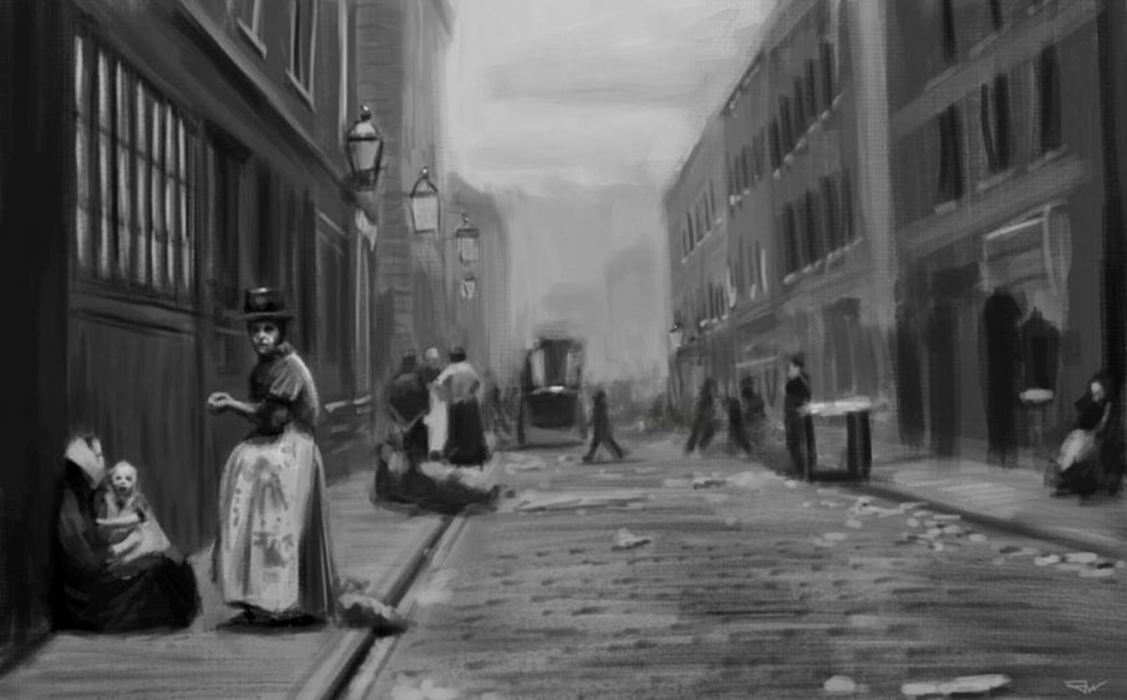 Halfway up Commercial Street, one block away from Spitalfields Market, lies an anonymous service road. The average pedestrian would not even notice it existed. But unlikely though it may seem, this characterless, 400ft strip of tarmac was once Dorset Street – the most notorious thoroughfare in the Capital; the worst street in London and the resort of Protestant fire-brands, thieves, con-men, pimps, prostitutes and murderers, most notably Jack the Ripper.

Spitalfields, and roads such as Dorset Street, became an attractive destination for impoverished Irish immigrants because it offered insalubrious but cheap accommodation and was close to the potential workplaces of the City of London, the docks, and the market. Many of the working-class Irish immigrants found work as costermongers, buying fruit and vegetables from the market and taking them round the streets on a barrow to sell to the residents. In addition to street selling, many Irish immigrants who had previously been employed on farms took to laboring in the building trade. Some took casual laboring work at the docks, while others took on the back-breaking work of excavating and wood chopping. When work was thin on the ground, as it often was, both men and women would take to the streets to beg. This hand to mouth existence meant that accommodation was hard to find. Families barely had enough money to feed themselves, let alone enough to find rent money for a reasonably furnished room. Consequently, the common lodging houses that lined Dorset Street and many other streets in Spitalfields experienced an unprecedented boom. However, their burgeoning business was soon to come under the scrutiny of social reformers, journalists and ultimately, the government.

By the early 1850’s the already pitiful plight of the poor in Spitalfields, exacerbated to an almost unbearable degree by the arrival of the Irish immigrants, were now among the poorest in London and began to attract the attention of the press. In 1849, a journalist, Henry Mayhew, visited Spitalfields in search of acute poverty for an article he was writing for the Morning Chronicle. He was particularly touched by the plight of the old silk weavers who he found living in a state of gloomy destitution, sitting in their wretched rooms, dreaming of their neat houses and roast beef dinners of long ago. He went on to note that the remaining Spitalfields weavers seemed resigned to their reduced circumstances and no longer had the energy to do anything about it; “In all there was the same want of hope, and the same doggedness and half-indifference to their fate”. Scathing reports such as these, combined with the report from the Royal Commission forced parliament to address the common lodging house problem and an act was passed in 1851 in a bid to improve the situation.

The regulations imposed by the Common Lodging Houses Act 1851 were well meaning but at best badly thought out and at worst laughable. Measuring rooms to allocate beds was all well and good if only one person was to sleep in it; however, it was a long- standing practice for people to share beds in order to save money, thus doubling or tripling the room capacity on particularly cold nights. The fact that each room had a sign stating the number of beds allowed was of virtually no use because few inmates could read, and those that could were not about to report their only source of shelter to the authorities. Fresh bed linen once a week would have been a good idea if the act had obliged the laundries to take it in. In reality, few self-respecting laundries would touch lodging house linen with a bargepole, as it was often infested with vermin, which infected the whole laundry.

The Common Lodging Houses Act 1851 had many failings but probably its biggest was that it did not provide any regulation on the way the proprietors made their money. Consequently, prices for beds were self-regulating. Anyone could go into business running one, provided they had a suitable property at their disposal. In Spitalfields, the downward slide of the local economy meant that by the mid-nineteenth century property prices were at an all-time low and that no self-respecting house-hunter would even consider living there. The elegant master weavers’ homes that had been so lovingly designed and furnished in the 1700’s was now suffering from severe neglect. Roofs leaked, plaster fell off the walls, the kitchen ranges were clogged with grease and floorboards began to crumble. As a result, these houses, which had once been only within the reach of the reasonably wealthy, could now be picked up for next to nothing, and this combination of inexpensive property and demand for cheap housing made Spitalfields into one of the key areas for men and women keen to make their living from the misfortune of the poor. Most of the new landlords were previously itinerant entrepreneurs who acquired their property with money won gambling on the horses, or by direct robbery. Furnishings were often obtained from hospitals or houses in which contagious diseases had been rife. Furniture from these sources was cheap, as no-one else wanted to risk buying it for fear of infection. Aspiring property magnates with little or no collateral soon hit on the idea of selling shares in their business in order to raise the start-up capital. Advertisements started appearing in the newspapers, offering a 4% return to those who invested in common lodging houses. Once a project had reached the required number of investors, the property was converted and quickly let out. Most of the investors in this type of scheme lived far away and had little or no idea of how their “customers” were being treated; if they had, it is doubtful they would have slept easily in their beds at night.

The Spitalfields common lodging houses catered for three major types of customer: those too ill or too old to work, those too lazy to work, and the common criminal. Generally speaking, lodging house proprietors employed a deputy whose job it was to ensure that all inmates paid for their beds every night, and a night-watchman, who acted as a bouncer, keeping away the unwanted visitors. Hence it often meant ejecting pregnant women, the sick and the elderly, knowing full well they would have to sleep rough; lodging house staff did not have much of a conscience. But the proprietors possessed even less concern for their fellow men. In addition to allowing desperate people to sleep in disgusting conditions, they also made more money from seizing the local monopoly on essentials such as bread, soap, and candles, which they then sold on to lodgers at hugely inflated prices. A detective sergeant who patrolled the area at the time wrote of the common lodging houses that their landlords were to his mind greater criminals than the unfortunate wretches who had to live in them.

In addition to the wretched lodging houses, Dorset Street and much of Spitalfields became overrun with tenements which were let out on a weekly basis. These were usually let out by the room, which came sparsely furnished with ancient and often dilapidated furniture. Thomas Archer wrote about such tenements in a report entitled “The Terrible Sights of London”, stating that each room was wont to be occupied by a whole family, sometimes two or three families, these being houses which seldom or ever are brought under the few and ineffective restrictions imposed by law, and where, from garret to basement, men, women and children swarm and stifle in the foul and reeking air, and wed it”.

These tenements were particularly popular with prostitutes as they provided the privacy required to service a client that was denied them in the huge dormitories of the common lodging houses. Landlords welcomed the prostitutes because they could charge them higher rent to allow for the risk of them being found to be living off immoral earnings. As the number of prostitutes operating in Spitalfields dramatically increased in the second half of the 19th century, the landlords of the tenements realized that additional money could be made out of becoming more organized in the way they controlled their tenants.

Spitalfields as a whole is now a vibrant and fashionable place to live, work and play; the home of artists and artisans, just as it was when the Huguenots settled there. However, as dusk falls, the seemingly indelible, sordid side of this fascinating part of London begins to emerge once again as the unknowing descendants of Mary Kelly, Polly Nichols, Catherine Eddowes and others begin to ply their trade around the hallowed walls of Christ Church. All signs of Dorset Street, “the worst street in London”, may all but have disappeared from the map but its legacy is too powerful to ever be entirely erased.

Written in 2012 by Andrew, English translator of Sol Marzellier Traductores TM, and based on the book “The Worst Street in London” by Fiona Rule, published in 2008.